Design, build, and evaluate a speaker.

In subsequent labs, three different methods of alternating the current to move the magnet back and forth were employed:

The first two methods can be readily followed. The sine wave produced by the waveform generator is more abstract, and requires more explanation. Many freely vibrating objects in nature produce a sine wave as they move back and forth. For example, in the figure below, a student in the Laboratory School for Advanced Manufacturing is pulling a strip of poster paper beneath a paint bucket swinging from a rope.

Paint flowing from a nozzle at the bottom of the bucket traces a pattern on the paper beneath it. The pattern that appears as the paint bucket swings back and forth is a sine wave. A moment’s thought suggests the reason that the pattern traced is a sine wave. As the bucket reaches the top of its arc, it gradually moves more and more slowly. At the top of the arc, gravity slows the bucket almost to a complete stop. At that point, the bucket reverses direction, falling back toward the center.

If the distance traveled during each second of movement is plotted on a graph, the resulting pattern is a sine wave, as shown in the figure below. 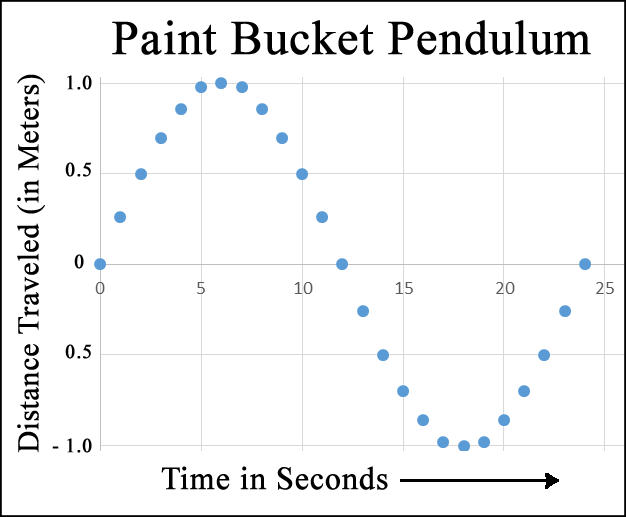 Frequency is one of two major attributes of a vibrating object. Amplitude is the second attribute. Amplitude in this instance refers to the distance that the paint bucket travels from peak to peak as it moves back and forth. If the farthest point that the paint bucket travels in each direction is one meter from the centerline, the total distance measured from peak to peak would be two meters. In that case, the movement of the bucket could be said to have an amplitude of two meters.

The concepts of frequency and amplitude introduced through the context of the paint bucket pendulum apply to mechanical, acoustic, electrical, and electromagnetic systems. Therefore, it is worth taking the time to understand the underlying phenomenon since it will be useful across a variety of disciplines that include sound and music, mechanical systems such as the linkages coupled to the linear motor in previous labs, electronics, and mathematics, among others. For example, the term “sin (x)” in trigonometry is just a way of describing the distance that the object travels at a given phase in the cycle. Much of mathematics was originally developed to describe natural phenomena such as this. Today, these concepts are often taught out of context, making them abstract and difficult to understand.

In the series of FabNet Invention Kits developed in collaboration with the Smithsonian Institution, the Linear Motor Invention Kit was developed to provide scaffolding for the Telephone Invention Kit. As you have seen in Lab 3, a speaker is simply a linear motor with cone that amplifies the sound. As the frequency of the waveform generator is increased to 60 cycles per second or above, a clearly discernable tone can be heard. It just is not very loud. Adding a speaker cone focuses and amplifies the sound.

Directions for using the winder to wrap magnet wire around the solenoid tube are found on the Make to Learn web site here:  https://maketolearn.org/inventions-kits/solenoid/make-2/

The process of wrapping the magnet wire around the solenoid tube typically takes about five minutes. The process is straightforward. Mastering this skill has two benefits. Completing every step of fabricating and assembling a solenoid removes the mystery from the process. It also allows you to design solenoids for specific purposes and uses. Ampere discovered that the strength of a magnetic field generated by a solenoid depended on three factors:  (1) the diameter or gauge of the wire, (2) the number of wraps or turns around the solenoid tube, and (3) the length of the solenoid tube.

Increasing the number of wraps increases the strength of the magnetic field produced. The insulation on magnet wire is a special varnish that is a very thin coating. This allows more wraps of wire to be wound in a given space, increasing the strength of the magnetic field. To create a more powerful linear motor, therefore, more wraps of wire could be added to the solenoid tube.

In the case of the linear motor, the solenoid tube is placed on supports, allowing the magnet to move freely back and forth. The construction of most dynamic speakers is slightly different. The permanent magnet is usually attached to a fixed base so that it cannot move. The magnetic field generated by the flow of current through the solenoid wire, therefore, causes the coil of wire to move back and forth. The coil of wire is attached to the speaker cone or diaphragm. The movement of the coil of wire consequently causes the speaker diaphragm to vibrate, producing sound waves.

If there are too many wraps of wire in the solenoid coil, it may be so heavy that it is unable to move the weight of the coil efficiently. Consequently, the design specifications for an efficient linear motor and an efficient speaker may differ. However, in the case of the FabNet Linear Motor Invention Kit and the FabNet Speaker Kit, we chose to make a pedagogical point. We wanted to emphasize that the same solenoid can be used in both a linear motor and in a speaker. Using the same solenoid for both makes it apparent that a speaker is in actuality a linear motor with a speaker cone attached.

In addition to the science and engineering concepts involved, there are also cross-disciplinary extensions to mathematics. Joe Garofalo and Kim Corum have successfully worked with middle school students in related activities in which the students derive Ampere’s Law. The mathematics concepts addressed include direct and inverse relations. Both students who have had beginning algebra and pre-algebra students were successful in this activity. In addition to the mathematics concepts learned, an understanding of Ampere’s Law is useful for understanding a range of inventions that incorporate solenoids.

Objects with a greater mass vibrate more efficiently at lower frequencies. Objects with a lower mass vibrate more efficiently at higher frequencies. For that reason, speakers designed to play bass notes (called woofers) tend to be larger than speakers designed to play treble notes (called tweeters). In high fidelity speaker systems, several speakers are combined into a system that can play a range of notes with great fidelity. In some cases, the experience can closely resemble listening to a life performance.

A subwoofer can play very low frequencies that can be felt as well as heard. If the volume on the stereo amplifier is increased to a high level, a 20 Hz tone played through a subwoofer may be seen as well as heard. This provides a way of establishing that a speaker simply produces a back-and-forth movement of a diaphragm to create vibration in the air that is perceived as sound. 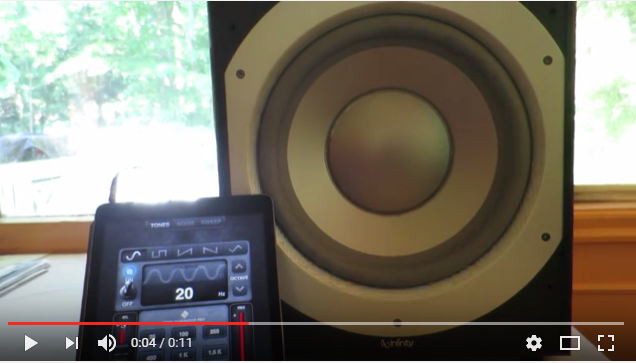 Even a speaker made of simple materials can sound remarkably good. For example, the speaker below (Figure 6) is made of paper, with a twist of wire wrapped around a paper tube to form a solenoid. The construction details clearly show that the magnet is attached to the base. Consequently, the wire coil moves back and forth, causing the paper cone to vibrate.

Once you have designed and assembled a speaker system, attach the output of an amplifier to the leads of solenoid wire.

Evaluating the Fidelity of the Speaker

If a series of tones of different frequencies is played through a speaker, the speaker will not respond equally to all of the frequencies. A sound level meter is used to measure the output of a speaker.

The data that they collected was recorded in a table such as the one shown below.

The students then used a spreadsheet to graph the results, An example is shown in Figure 10 (below). Based on this figure, can you determine which speaker cone had the greater mass?

Once you have assembled and tested your speaker, evaluate its fidelity by generating a frequency response chart such as the one above. The Speaker Test Tone Generator on the Make to Learn site produces tones at intervals from 250 Hz to 8000 Hz.

Then document the process of building and testing the speaker. Record your observations about the construction process and the results of your evaluation of the speaker in a half-page report.